Dying to tell you…

More people die than are ever born: death is the one common experience of all living things. So why do we try so hard to pretend it won’t happen to us? 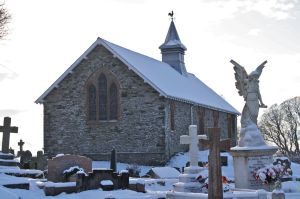 We are, as a society, squeamish about death and dying, so that faced with the bereaved, we don’t know how to cope, what to do or say, or how soon we can start being normal again.

It’ll be a whole lot easier, I suppose, when it’s me that kicks the bucket. Nothing to do but lie there and be done to. God, I hope so. How appalling if it turns out that I’m going to have to float about like a bit of steam, watching in fury as amateur family members fumble through my funeral and put some god-awful song from Cats over the speakers as the curtains swish discreetly around my coffin. I want the third of Richard Strauss’s Four Last Songs, if my executors are reading this.

It’s an easy game, being flippant about one’s demise. What wasn’t easy was watching my sister die, too bloody fast and too bloody slowly, of an aggressive cancer that gave her months of excruciating pain. She was 56, fit, strong, tough, and it was her husband who’d had a major heart attack less than a year before. Read more…

I'm a writer from West Sussex is southern England, but after 30 years of urban life in London and Liverpool, I now live in a remote village 1,000 metres up in the Carpathian Mountains of Transylvania. My first book in Romania was published in November 2016: "Din Liverpool in Carpati: cum mi-am gasit fericirea în inima Transilvaniei". The English version, 'A stake in Transylvania' is out soon. I've also written (so far) four bilingual (En/Ro) children's books.
View all posts by Arabella McIntyre-Brown →
This entry was posted in Uncategorized and tagged Arabella McIntyre-Brown, articles, bereavement, cancer, colour piece, death, dying, English, fear of dying, funerals, Ginny Fiennes. Bookmark the permalink.

Blogs on sport, wildlife and modern irony by Roger Morgan-Grenville

Walking with grief. In memory of my husband and soulmate, Rich.

Free your imagination and express your original ideas

The Book Reviews You Can Trust!

A sweet story of love and loss in Transylvania

a new book by Arabella McIntyre-Brown

Marketing With A Story

Exploring the world of late Georgian and Regency London

M.M.Kizi Tales from a shed

Life in Transylvania through English eyes